Participation in a gathering as defined by the German Assembly Act

There are specific rules and regulations in the German Assembly Act „Versammlungsgesetz“. We would like to inform all citizens with the following listing on the specifics of this law, dealing mainly with demonstrations.

This listing doesn´t claim to be complete.

Freedom of assembly (Article 8 of the German Constitution)

Right of multifaceted forms of the expression of opinion

Restrictions by the authority in charge “Versammlungsbehoerde”

Organizer of the assembly

Leader of the assembly

Participants of the assembly

Ban of covering of the face

Demonstration rules for the police

Constitutional mandate of the police

Freedom of assembly (Article 8 of the German Constitution)

Every citizen has the right and the freedom to assemble peacefully with others and to express his or her opinion. The freedom of assembly or the right of demonstration is one of the fundamental rights of the citizen against the “despotism of the state” and one of the main pillars of a democratic political system.

Right of multifaceted forms of the expression of opinion

The highest German court, the Federal Constitutional Court, decided in the famous “Brokdorf decision” clearly, what an immense meaning the freedom of assembly has for our democratic political system. Every citizen has the right, which is saved by the Constitution, to voice his or her opinion, creatively and even in a provocative way in public. This right even counts for opinions which are not shared by most of the society or as well meet with a refusal within it, including different–minded minorities.

To start, you have to keep the following information in mind:

A planned assembly, in the open air, has to be registered with the authorities in charge (mostly the regulatory agency, assembly agency) at least 48 hours before it is announced, so all necessary measures for the guarantee and the safety of the assembly can take place.
Exceptions are spontaneous assemblies and express assemblies / demonstrations, for which the 48-hours- rule does not apply. In those cases the police have to decide within the limits of their immediate responsibility.

Violations against the obligation to registration through the organizer or the leader of the assembly can be punished under the § 26 German Assembly Act.

Restrictions by the authority in charge “Versammlungsbehoerde”

To guarantee a peaceful togetherness, the assembly agency can – if there is a high risk potential – state several basic rules, which will be announced in a stipulation of terms (“Auflagenverfügung”). During an ongoing assembly these terms can be modified by the police, to enable the progress of the assembly or if basic rights of others are restricted excessively.

Organizer of the assembly

Organizer is the person, who plans, organizes, invoices or invites to an assembly. Everybody has the right to host a public assembly and/or demonstration. The organizer has to announce his name in the invitations to the assembly. Normally the organizer and the leader of the assembly is the same person.

Leader of the assembly

The use of armed security guards / stewards is punishable for the leader of the assembly by the § 24 German Assembly Act.

Participants of the assembly

Regarding the Constitution, every assembly deserves protection as long as it is peaceful (means nonviolent), and carried out without weapons. In this connection you have to bear in mind that an assembly in its totality (means majority) has to be violent to be called “non-peaceful”.

Due to this, the following are not permitted:

Not permitted are special statements, which breach effective laws or which hurt the Constitutional rights of others.

Ban of covering of the face

Any violations against this ban is punishable under the § 27 German Assembly Act.

Only assemblies, which are taking place “peaceful and without weapons “are protected under the Constitution. In case of a meeting of rivaling groups, the ban of weapons and or dangerous objects, is supposed to keep the possibility of harms as low as possible.

Carrying weapons and / or dangerous objects is forbidden, any violations are punishable under the § 27 German Assembly Act.

So called “protective weapons” (for example protective shields, helmets, etc...-even handmade ones-) are forbidden, because they could extend clashes between rivaling groups and could be used for repelling any course of action by the police.

Carrying a protective weapon or object, or any objects which could be used as weapons are punishable under the § 27 German Assembly Act.

Wearing a uniform, part of a uniform or any similar clothing as an expression of a collective political disposition is not permitted during an assembly or at any other given time in public. These regulations are based on negative experience during the "Weimar Republic" and the dictatorships in Germany, in which certain groups used uniforms to threaten and intimidate.

Any violation against the ban of uniforms is punishable under the § 28 German Assembly Act.

From time to time blockades are being used inside assemblies. Traffic and “unliked” corporations are being blocked or demonstrations of political opponents are made impossible. If in this cases barriers are built, in order to block other people or vehicles, the participants of these actions are punishable by § 240 german criminal code “coercion” and/or “disturbance of or breaking up an assembly” (§ 21 german assembly code). The right to assemble freely does not contain the right to block other peoples same level rights or to use force to push through own interests.

Normally, it is just a small amount of people, who will commit violations. Most of the participants just want to demonstrate peacefully.

If you see violations or non-peaceful actions within your assembly, show clearly, that you want to demonstrate peacefully and clearly distance yourself from this kind of people.

The police as well has a clear outline:

Constitutional mandate of the police

The police have to protect every legal and mostly peacefully assembly and have to guarantee the realization of it. Above that, the police have to assure the balance and protection of legal interests. The police work for everybody and are obligated to political neutrality.

Demonstration rules for the police

All the actions of the police have to orientate themselves on the principle of proportionality. Proportionality requests that every single action, which restrict the basic rights, has to have a legit public purpose and has to be suitable, necessary and proportional “means appropriate”. An action, which does not fulfill those requirements, is unlawful.

The police are responsible to differentiate between peaceful and non peaceful participant of an assembly (so called order of differentiation) and to adapt their actions accordingly. The behavior of the different participants (groups) will determine the direction and specification of the police actions.

In terms of an assembly friendly fundamental direction of the police, the police apply above that the order of cooperation. That means, that the police actively approach the organizer of an assembly and have conversations (so called “cooperative conversations”) before and during the event, respectively offer such talks to discuss particular details of the event, provide information and advice, to secure the undisturbed process of the assembly and to alleviate the handling of unpredictable situations respectively to prevent such situations before they occur. Those personal conversations ensure the mutual exchange of information and are a necessary tool to built confidence between the parties.

The police should act as transparent as possible. That means that the enforced rules and the actions of the police are comprehensible. The police should explain when they do something and why they do it this way. 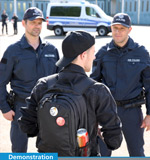